It is a great privilege for me to have had this interview with Ryan Forster (aka DEATHLORD OF ABOMINATION AND WAR APOCALYPSE) a great figure in Canadian Black Metal since he founded with J.Read the Conqueror cults, more recently Death Worship, and, with great joy, permanent member of the Blasphemy gods since 1999. So we're talking about all the above-mentioned groups, the Ross Bay Cult, what TRUE Black Metal should be. An interview that makes you want to burn down your entire discotheque to keep only Venom, Bathory, Sarcofago, Blasphemy, Beherit, Conqueror, Archgoat and a few happy fews... But no, I wouldn't burn my atmospheric Black Metal nuggets!
Come on, immerse yourself in this real moment in the history of Black Metal! Le Scribe 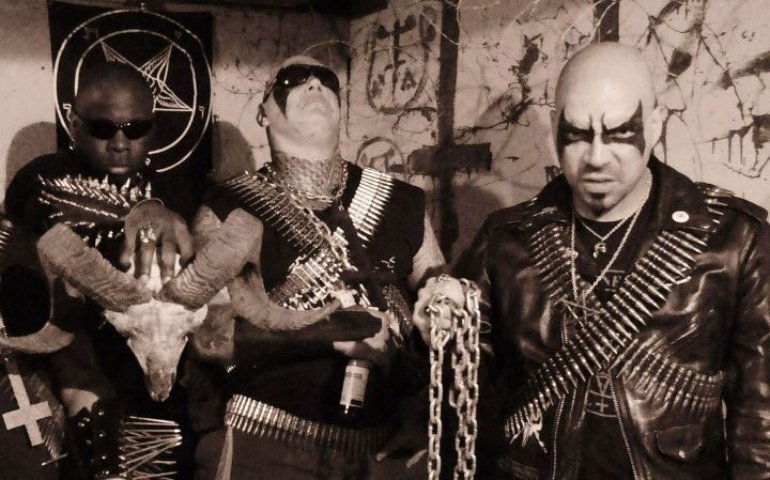 Hail Ryan, thank you for answering my questions it's quite an honor ! We're here to talk about your two bands : the cult outfit you created Conqueror, and Blasphemy, because you're the guitarist of the band since 1999. Are you Ok ? And what's the news ?

It’s Spring 2019ce while I am typing this and Blasphemy are still active on the stage and we are about to go back to Australia for another dose of desecration !!

You created Conqueror back in 1994 with James Read (vocals and drums, also member of Revenge, Axis Of Advance) in Canada. Can you tell us about the creation of this damned band ?

Back when James and I met I was trying to get a Black Metal band called Domini Ineri off the ground but I was inexperienced and couldn’t get things moving. James was in Cremation and they were quite active both in recording demos and playing live. We kept meeting up at local shows and record shops and starting hanging out and showing each other new demos that we were getting in the mail. This eventually led to Cremation and Domini Inferi sharing the same rehearsal room in the local rehearsal warehouse. Soon afterwards both Cremation and Domini Inferi fell apart and that left James and I free to explore new projects. At the same time both James and I were sick of the city that we were living in and decided to move to another city and start fresh. This is something I still do to this day ! I keep moving around and now I have ended up in Germany. Back to the Conqueror story : While settling into this city that we moved to, we kept talking about our visions for a band that pushed the limits of everything ! This is when Conqueror was created ! We started to rehearse together testing out ideas and this all coalesced into Conqueror !

In 1996 you released the demo Antichrist Superiority. This is a fierce one ! The War Metal you practised was intense ! What were your influences back then and what did you want to do with Conqueror ?

We were very closed-minded. (We still are !!) and only listened to Blasphemy, Sarcofago, Order From Chaos and Bathory on repeat ! And I mean that we were playing those albums over and over like a psychology experiment ! We would rehearse at all times of the day or night at least 4 or 5 times a week and we would only talk about ideas for Conqueror the rest of the time. It was total obsession ! The plan was to keep pushing music to the limits of human ability, and pushing a nihilistic and cold ideology that would compliment the extreme music. We also thought that we would do live shows, but unfortunately back in 1996 there was not many people around on with the same mindset as we had and that never materialized. 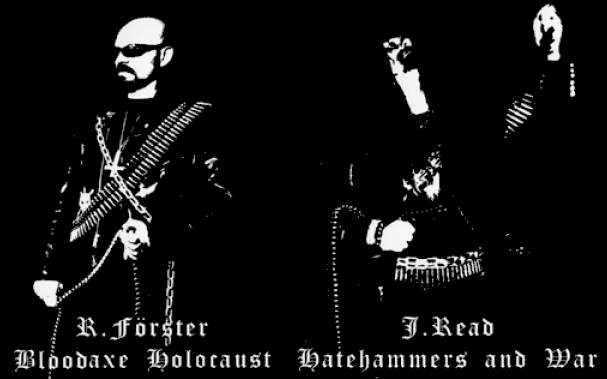 Can you tell us the story of The Ross Bay Cult ?

This goes back to the 1960s at least ! Maybe even earlier ! The Ross Bay Cemetery located in Victoria, BC, Canada was a ritual site for the local Satanic sects. For what exact reasons they were attracted to that specific cemetery, I don’t know ? But I have my theories. There were many incidents reported over the years and even a book written in the 1970s about ritual abuse ! This attracted members of the band Blasphemy, and they often visitied the cemetery and met up or scared off Satanist practicing there ! The members of Blasphemy included homages to the Ross Bay Cemetery in both their lyrics and interviews, etc. And of course as a teenager still finding my own path I was also very attracted to this entire Ross Bay Cemetery phenomenon !

Blasphemy, the original Canadian War Metal founders, were born in 1984 ! Were you a huge fan of the band ? How did you heard about them ?

I got into music at a very young age. I was attracted to Metal music in particular and I especially liked the faster songs and more heavier songs on the commercialized Heavy Metal music I was buying. For example Twisted Sister would have a radio hit, but on the same album they would have a couple of fast songs and dark and evil sounding songs. And those were the songs I liked. This led me to discover bands like Metallica and Slayer and eventually these bands weren’t heavy or fast enough for me. At that time bands like Razor, Sacrifice, Sodom, Destruction, and Kreator were showing up and I ate all of that up. Of course even those bands weren’t fast enough or heavy enough and I turned to Napalm Death and Carcass when they were first starting to make noise around the world. And I still wasn’t satisfied. Those bands were fast, but they were missing the evil atmosphere that I was searching for. In my never-ending search, I subscribed to The Wild Rag that was a Fanzine/distro delivered to my door about every 6 weeks or so. Blasphemy signed to Wild Rags Records and I was instantly attracted to them through the interviews and advertisments in the Wild Rag. I ordered everything that I could and I was not disappointed ! Of course I was immediately a ‘huge fan’ !!

What is so particular in Canada to have these ultra-extreme bands ?

I don’t know…. ? Canada is such a nice country with a comfortable way of life. Maybe some of us are natural barbarians and need an outlet for these urges instead of b eing in a society that cradles you from birth until death ?? That’s just a thought off the top of my head….

What is War Metal to you ? And is there any difference between War Metal and Bestial Black Metal ?

I don’t really think about this. When we were doing Conqueror we didn’t know about a ‘War Metal’ genre. I had the 1st Holocausto (Brazil) album, but that was the only place that I read about War Metal. We only knew about other bands in this style that we were playing and they called themselves Black Metal. Blasphemy, Beherit, and Sarcofago were called Black Metal to us, and that is what we were emulating. Now I don’t mind these terms like ‘War Metal’ and ‘Bestial Black Metal’ attached to my music because it separates us from the wimp bands that call themselves ‘Black Metal’ but play weak and melodic crap that is actually an insult to the term ‘Black Metal’.

Conqueror's album « war cult supremacy » was released in 1999. It's a cult album in the whole world ! Did you imagine back then creating something so important ?

‘War.Cult.Supremacy.’ was actually recorded in 1996ce but not released until a few years later ! We didn’t know that our music would actually catch on or anything. We just wanted to pay homage to our favorite bands and keep the Black Flame burning in the scene. In the mid 90s things got really bad for Metal in general. Every Metal genre was suffering with some of the worst releases I ever heard being released during these years. You had to look really underground to get killer music by bands that didn’t lose their vision. Everyone talks about these bands from Norway still to this day, but to us they nose-dived almost immediately. They went from brutal Black Metal to keyboard ridden melodic garbage in just a couple of years. Or else we saw these bands in funny photo sessions looking like wrestlers  or some kind of joke. So Conqueror was also a backlash against the wimps ruining the Black Metal scene. We were just following our own path. 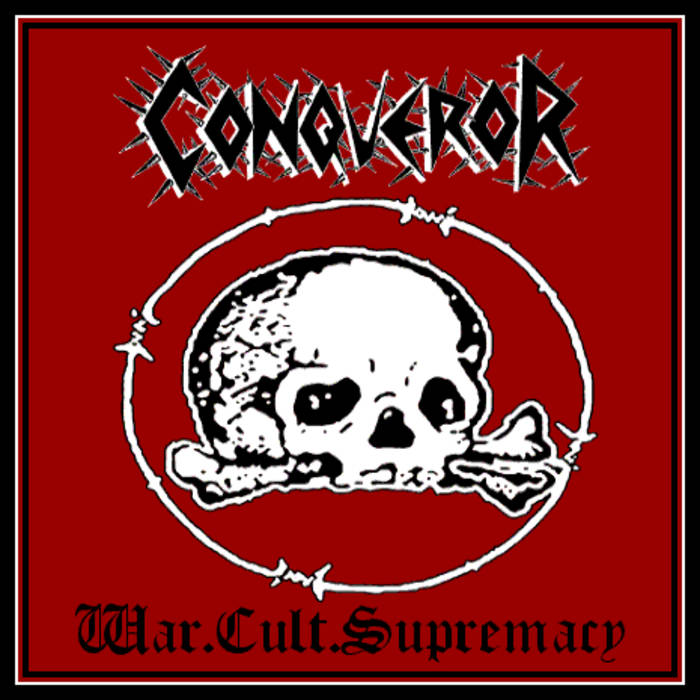 This album is very violent, speed and Raw. I can hear Death Metal and Old-School Black Metal like Bathory or Sarcofago in there. But to me there is also a punk side in your music ? You Agree ?

I never really listened to much hardcore music. Maybe those sounds came from the bands that we were influenced by ? I know that members of Blasphemy, Sarcofago, and Bathory had some direct punk influences, so perhaps we interpreted those influences in our own way ? I just don’t relate to punk music at all.

You joined forces with Blasphemy in 1999. What is your feeling about cult albums of the band like Fallen angel of Doom and Gods Of War ?

Those are 2 of the most perfect albums ever recorded in my opinion ! Pure unhinged beastiality captured on tape in a time when no one was strong willed enough to walk their own path !  Both albums were way ahead of their time, and this music could only come from unhinged outlaws and can’t be faked or recreated ever again ! You play on Live ritual : friday the 13th ? Can you tell us more about it ?

Unfortunately that was the worst show from that era of Blasphemy. We were invited to do a show at a local festival that included bands from all genres of Metal and it was pretty much a collection of some of the most boring and crappy bands possible. Only one band (Allfather) I can remember being interesting. Maybe another cool band played but I can’t remember…. Anyway, the whole ordeal was ridiculous except for the fact that we met Yosuke Konishi for the first time and this is a dangerous meeting that still stays strong to this day ! Anyway, we did what we could in a shitty situation and you can hear the results in this release ! In the end we think that this was a killer record and we are satisfied with it ! It captures the anger and desecration atmosphere !

Can we imagine, one day, to have a NEW record by Blasphemy in the studio, with you playing in ?

Perhaps it will be something that you can only imagine !! It is something that I would like to see happen, but there is just too much chaos surrounding the band that we can’t seem to make it happen. Every time we come close to putting something together the chaos strikes and everything falls apart !

What do you think of other subgenres of BM ? Is there anything you like ?

Both !!! But I lean more to Bathory because they took the ideas of Venom to a different level ! 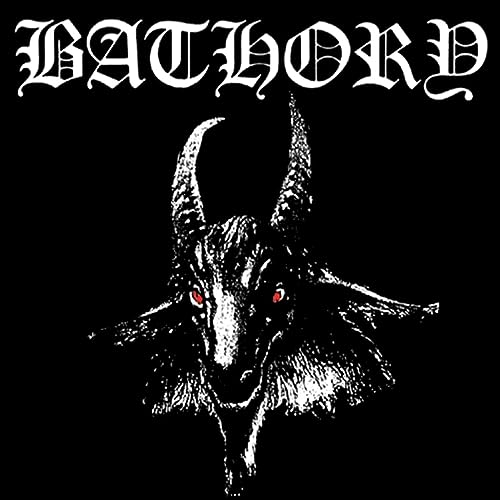 Albums ? Yes ! If you asked for demos than I really couldn’t. I have mostly been influenced by demos like The Lord Diabolos ‘Down There…’, Blasphemy ‘Blood Upon the Altar’, Pentagram (Chile) demos, Necrovore, VON, and lots more. And there have been EPs like Grotesque ‘Incantation’ and Hellhammer ‘Apocalyptic Raids’ that really made and impact on me. And also I am into Black Sabbath, Iron Maiden and Judas Priest, but I will omit these ones and stay more underground.

What do you think of the new « supergroup » Blasphamagoatachrist, with Nocturnal Grave...on vocals ?

This is absolutely perfect !!!! I am more than thrilled to see Black Winds back at it and delivering desecration beyond any band trying to do this style today ! So killer !!!!!

You can add whatever you want :

The new Death Worship EP ‘End Times’ has been unleashed and you can find some more information about this savage piece of darkness at the Nuclear War Now ! Productions website . 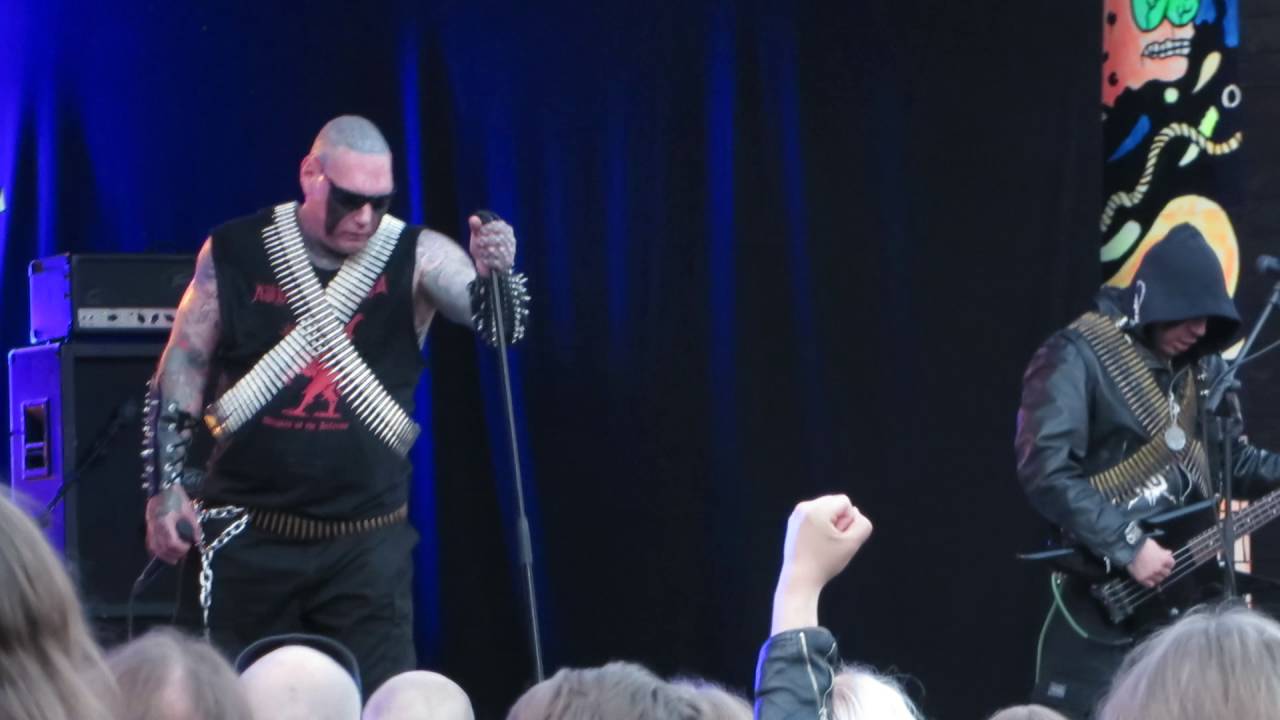 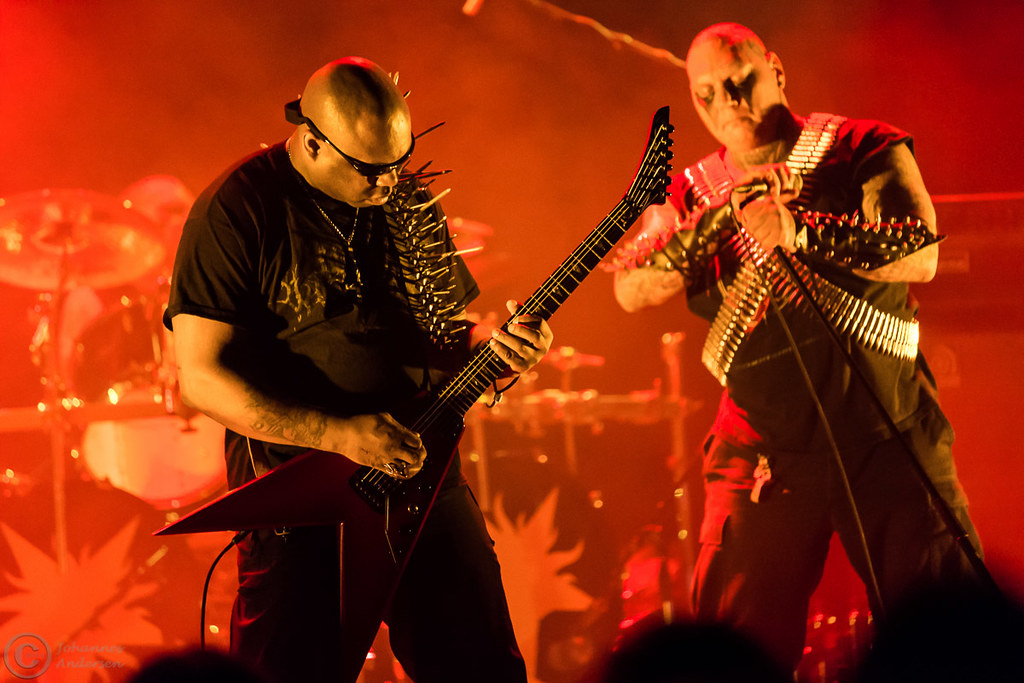 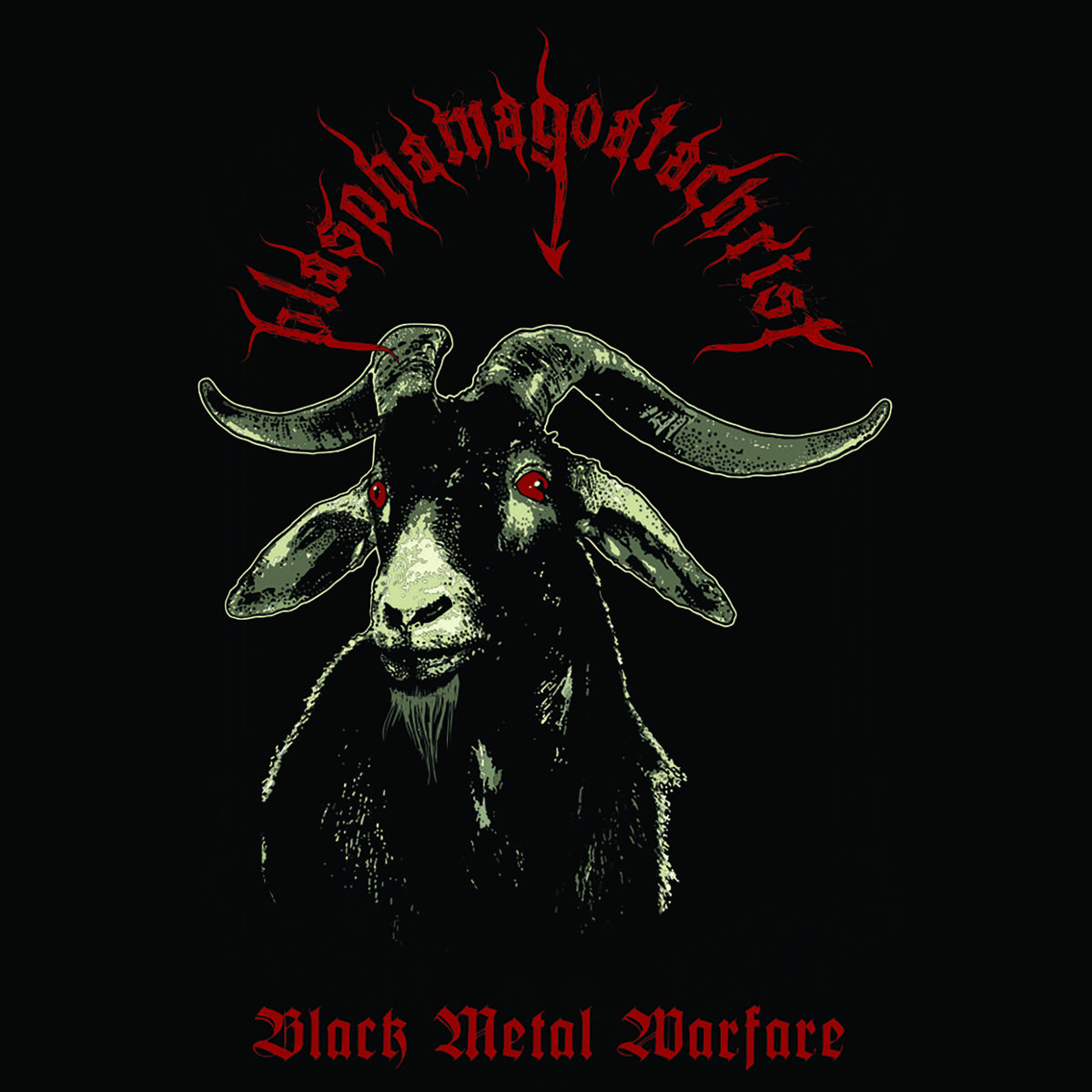