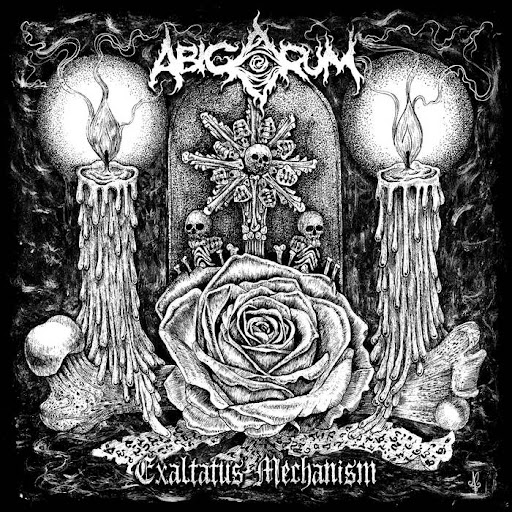 ABIGORUM - EXALTUS MECHANISM - 2019 - SATANATH RECORDS Cosmic Ambient Doom/Black Metal  Aleksey Korolyov may be the (very busy) boss of Satanath Records, the biggest underground label in Russia, but he is nonetheless an artist and musician.  So is Abigorum, which is neither more nor less than its creation, in the year of grace 2012.  Aleksey plays there almost alone until 2019, when he recruits two musicians from Germany (Tino Thiele on guitar and vocals, also in Metamorph and Vulfgar) and Sandra Batsch on bass). The result of this mutation is this extremely black and sumptuous album, skillfully blending Black and Doom Metal and gloomy Ambient. This "Exlatatus Mechanism" takes you to the darkest confines of space, to distil a music of the spheres that has nothing reassuring about it. Behind Tino's versatile vocals, going from Black Metal "shrieks" to a corpse growling in a second death phase, reinforced for the gutturality of the German language, hides
EN SAVOIR PLUS

Шлях/The Way by VainturN "In the mirror is the culprit of your vice, in those eyes the uncertain look of doubt and lies to yourself and you need to defeat it!" (Gregorth) Interview with Gregorth Hello Gregorth, thank you for answering my questions ! You are a Ukrainian band founded in 2017. What led to the creation of Vainturn? What were your influences and goals? Hello, Pierre! Thanks for your question. I would not say that VainturN appeared suddenly. Over years, I have watched the world surround me and analyzed human`s actions. Roughly speaking from the age of 15 I began to write music and lyrics, based on the emotions I get experienced. VT (VainturN) is my inner world, my vision and feeling of interacting with the outside world, with its wounds and flaws. VT - symbolizes the “wrong path”, the path on which a person faces his fate when he is drowning in his sins and vices. VT is a pit that awaits everyone who goes off their true, right path! VT is c
EN SAVOIR PLUS
Autres articles