RAW BLACK METAL BAND FROM BRAZIL : INTERVIEW WITH ECHOES (IN ENGLISH AND NOW IN FRENCH !) 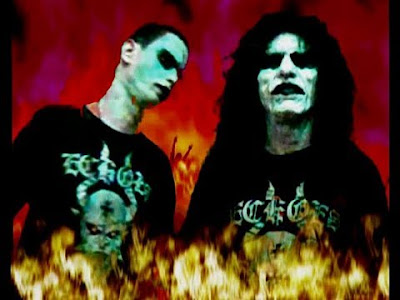 Interview with Stanley Brian - May 2019 Hi Stanley. The band Echoes was created in 1991 in Brazil. Can you tell us your story ? In fact the band Echoes was created in 1989 by Mike Elival. He is my father. He started the band's activities in '89 but only recorded their first "PARADISE OF DESOLATION" Tape Demo in 1991, that same year another demo called "UNENDING STATE OF ANGUISH" was released. The following year the songs of these two Demo Tapes participated in the collection STARS OF ROCK 2 of the label STAR MUSIC. Your single, Paradise of Desolation, released in 1991, sounds a bit more Old-School Death Metal mixed with Black Metal from the 80's. Do you agree ? The extreme metal scene of the 1980s and 1990s was something that influenced the beginning of ECHOES trajectory. Mike listened to the sound of hellhammer bands, Celtic Frost, Napalm Death, Slayer, Venom  among other precursors of extreme metal and black metal in general that
EN SAVOIR PLUS
Autres articles