- juin 19, 2019
What can i say ? Napalm IS GRINDCORE ! Period ! Ask anyone involved in Grind and you will have the same answer. This interview will be also published in my forthcoming book about Grindcore : "Scum : Une Histoire du Grindcore" at Camion Blanc publishing. Let's enjoy this great moment with Mark "Barney" Greenway, singer of the crew, and appreciate his views about Napalm in paritcular and Grindcore in general ! Thanks to him ! 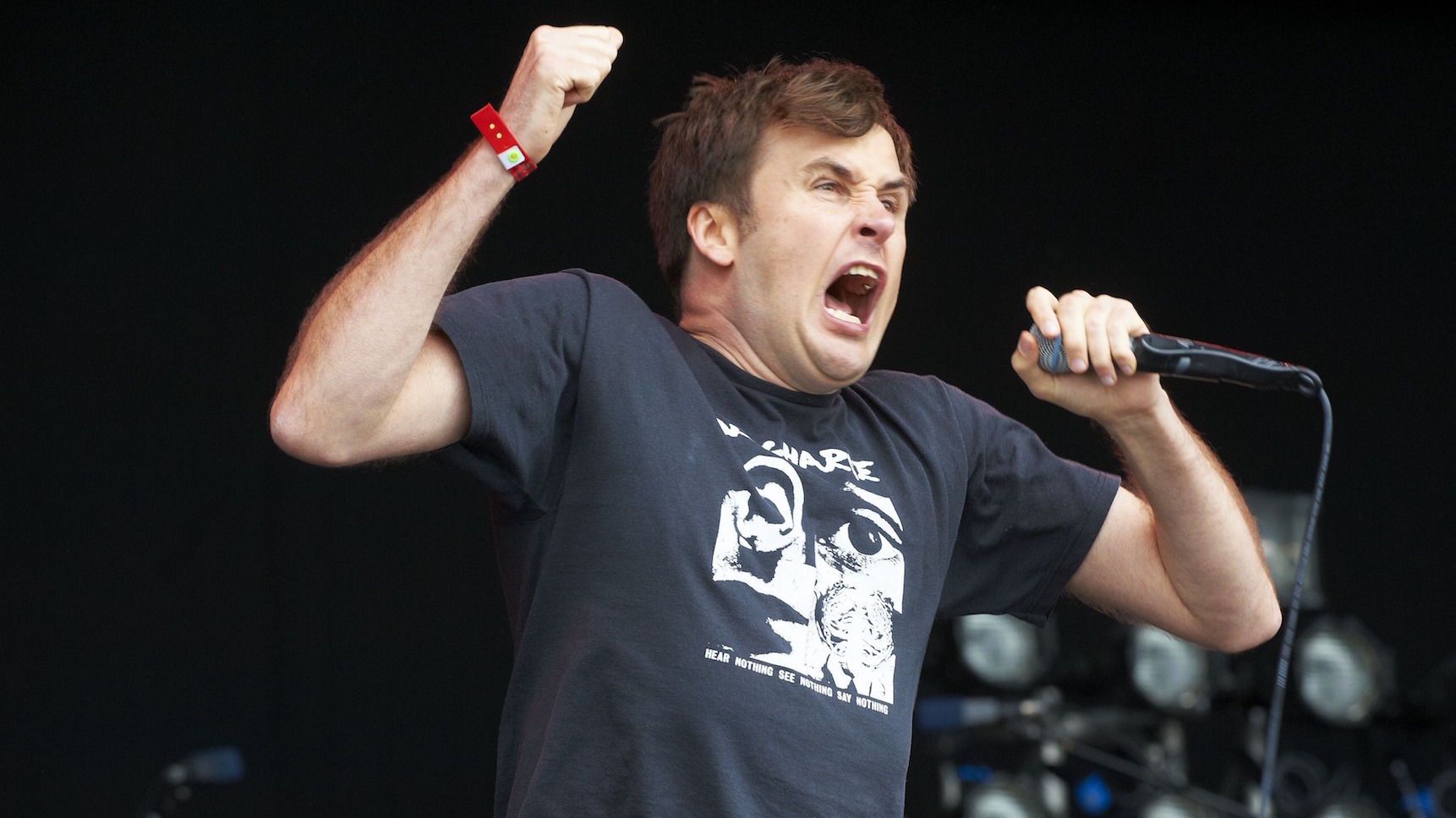 Napalm Death. This name is like thunder in the sky. When I was a teenager and discovered you I was really scared (late 80’s). Was it one of your goals, to be scary ?

Interesting question. I think subliminally, yes, to scare and shock – but with the motive of exposing injustice and inequality in the world. So not in the traditional sense of pure escapism of something like that. I suppose a good example is the cover of the ‘Scum’ album. I suppose it’s sort of scary looking – and very monotone and bleak – but of course it’s more about iconic misery in terms of exposing multinational corporations and their actions.

Can you remind us the conditions of Napalm creation ?

I’m not totally sure of your question there…but I think you mean the origins of the band. Obviously I was not in the band at that time, but I was around them certainly. Effectively Napalm death was firstly formed at school with a group of friends – originally called Civil Defence actually. They grew into – and outwards from – the very vibrant punk and hardcore scene around the UK. I remember those times quite well – they were amazing. And I saw Napalm Death in the very early days as a three-piece. Totally blew my mind and I could see they were going to be something special.

You were involved in the UK hardcore scene, how did you discover US extreme metal bands, Japanese and Swedish HC that helped you create your sound ?

I think people know about this by now, as it has been widely documented. But, yeah, tape trading. It might not seem like much now, but waiting for the postman for the latest C-90 cassette tape to drop through the door was great fun. This was a worldwide network and of course you could easily be writing to people from bands such as Anti Cimex or Systematic Death – or equally on the death metal side Devastation or Paradise Lost or somebody like that. Or maybe just a person not in a band with tons of trading connections and fountains of enthusiasm. People mostly liked a bit of everything: punk and hardcore, death metal, noise rock, ambient noise…whatever.
So hearing those bands just made Napalm Death want to play super-raw and in fact beyond that try to push the boundaries of noise and beats per minute as far as possible.

My book will be named “scum”. Well, I don’t need to explain more. After all these years what does “Scum” represents to you guys ?

Stepping outside of the band…it’s a milestone not only in extreme music, but I think also in the more general musical sense. I think it’s still a very relevant album today and I love playing the songs live. And in terms of the subject matter, well you know that multinational corporations have not cleaned up the way they act in the world.
Also, for me on a personal level, it speaks to me of a time of great friendship in Birmingham and beyond: people without much in terms of possessions looking out for each other and loving the simple pleasure of life and confrontational music.

If I say Grindcore, what can you tell us about it ?

Well, it was Micky the last Napalm Death drummer who came up with that genre term and he defined it as anything from ridiculously fast to painfully slow. So while that seems quite wide and simplistic, what Micky said really connected with me. I do find it quite funny sometimes though when people argue over small details of what is Grindcore and what is not. We can all see that the genre has gone in a million different directions and that is at it should be. Even though I have my own personal tastes and don’t like everything that’s out there, it’s not for me to say where the genre should or shouldn’t go. 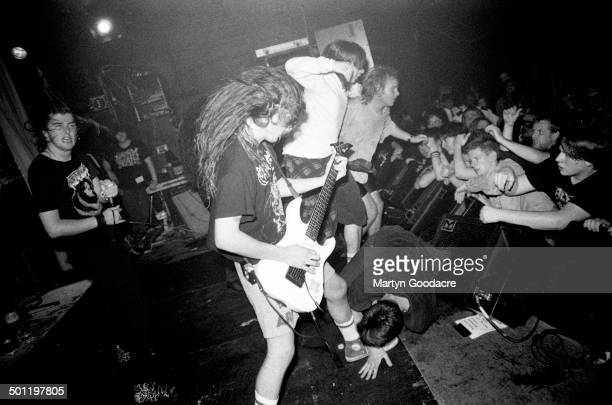 when you were young punksters in the early 80’s did you ever imagine that one day you’ll be the engineers and “gods” of a music genre ?

No, I mean, it’s nice to be complemented on things, but I never gave a shit about being put on a pedestal like that. You need to have a grasp on reality, or you can end up believing your own hype and becoming egocentric and probably losing your creative edge completely.

Your favorite ND album, and why ?

Impossible to narrow it down to one album.  As purely a Napalm lover, I think ‘Scum and ‘From  Enslavement…’ are inseparable. I love that both were breaking through musical barriers but in their own chaotic ways. Since I’ve been in the band, ‘Utopia Banished’ I really loved making – it’s so raw and for me was a little bit of a welcome antithesis to the polished nature of ‘Harmony Corruption’ before it. I also think that ‘Apex Predator…Easy Meat’ hits the sweet spot in terms of the band amalgamating its many opposing influences without losing any of the rawness.


After 30 years on the road and in the studios are you ever tired of all this ?

We’re all human – some days we don’t feel great about either things around us or about ourselves when we’re bouncing around the world. But for me personally I feel we have good creative urges and I think we go for it live as a band.  I still feel there is much for us to do and say, so that kind of desire outweighs the small day-to-day mood swings.  Honestly, the day that Napalm Death leaves my particular universe I would feel like I’d lost a limb or something.


Can you tell us what do you think of crust/grindcore evolutions as Goregrind, pornogrind, black/grind and so ?

I don’t judge things based upon the genre – I take a band by its merits – or lack of - individually. I don’t think it says much to make judgment on such wide sweeps.  I just want to hear bands hopefully with that special something in their sound and approach no matter the genre or subgenre.

Napalm is now an institution, how can you stay so true ? Is it a discipline ? Is it because of your ideals ?

Ah, Napalm Death being an institution is just one perception of us. Really, when you strip it down we’re a band still making albums and still touring fully and still saying what we think needs to be said and try to contribute to making a difference. It’s just us continuing to try and make Napalm Death the best thing it can be in terms of all its activities.
What I certainly wouldn’t want us to be is some kind of glorified tribute band or parody of ourselves. No thanks.

Is Napalm still a politicized band ?

Yes and no – and I think that goes for Napalm Death now and when it first started. I think you could reasonably say that many of the ideas come from the ‘left’ perspective in terms of exposing exploitation and standing with the exploited etc. But I also think you could call the band apolitical for the same reason. Because, really, politics means nothing without people. For me, it becomes mostly about rediscovering humanity because until we do that as a global population we are not going to rediscover the ways to make the world fairer or stop oppression. And in turn open our eyes fully to other sentient beings and the evolving word around us.

Your top ten albums ever, in every genre you wish ?

What are your recent musical favorites ? And how do you see the evolution of the scene nowadays ?

I have to be honest and say that I literally haven’t heard anything new lately – I’ve been working for long periods on the forthcoming Napalm Death album. For good or bad, I tend to tune out from other music for months on end whenever we’re making a new one.
As far as the scene, the key word there is evolution. It’s a very natural thing and I have no – and should have no - control over it. I also have no real catch-all opinion about it – it will go the places it needs to go. As I mentioned earlier, I take individual bands by what their merits are to me. Like any music lover, some things I will like and some things I won’t. 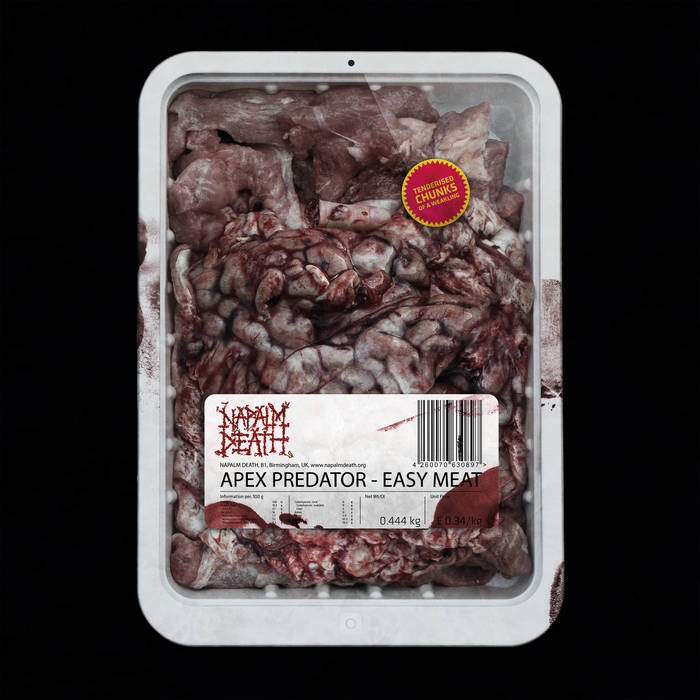 Will you still play grind/death in ten years ?

I couldn’t have reasonably assumed I was going to be still playing now thirty years ago, so for that reason I think there’s a very good chance we / I will be making abrasive noise and jumping around onstage in ten years time. Why not?

A blank space : you’re free to tell everything you want to the readers :

Time just seems to fly by, but we’re still here making a tremendous amount of noise. So we wouldn’t be able to if wasn’t for all you lovely people who have consistently supported us. Simply, thank you.
Thank you Napalm ☺ 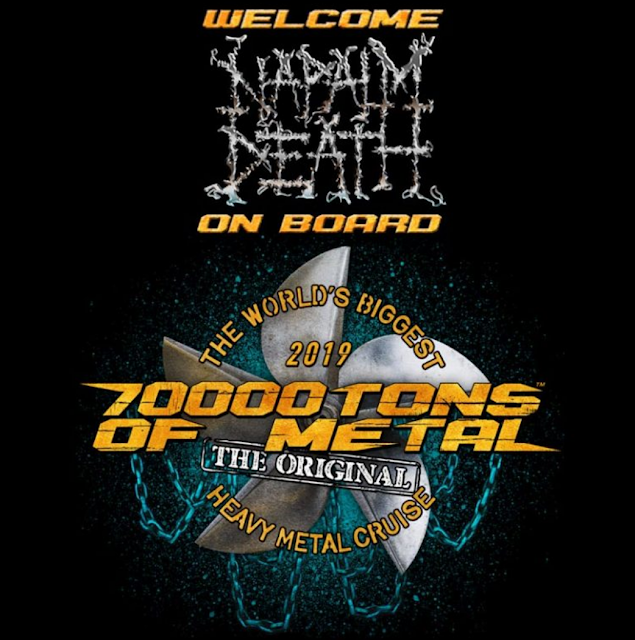