Cult Black Noise from the USA ! Enbilulugugal on interview (ENGLISH)

Thank you first for answering my questions, can you present the band and yourselves to the readers and especially the ones that does not know you yet ?
Enbilulugugal is a strange band to say the least. While much of it is noisy and chaotic as shit noisefukk, other stuff is noisy but musical at the same time. You never know what you're gonna get from album to album.  We started out as a total “Black Noise” band and have since incorporated other genres into the music making it a sound that isn't accessible to many people. The few “fans” we have probably don't know a whole lot about the band. So thank you for the opportunity to do this interview!
Since 2000, you play, I quote “Apocalyptic Noise Black Metal”. This style really suits you; I mean we can hear in your music influences of Noisegrind bands such as Anal Cunt, Noise as played by extremists like Whitehouse, and a particularly raw version of Black Metal. What lead you there ?
I started Enbilulugugal with  a friend I knew in a Yahoo! Chat Room. The first demo, "Satanic Killing of Christ in the Pagan Forest on Fullmoon Night", was officially released on June 29th, 2000. I was 19 at the time and Nebiru was 16. We wanted to create something chaotic, lo-fi with very little talent or time put into "Writing". Most of it is always written and recorded on the spot. I can't say we had much influence other than trying to piss off the elitists that hung around the "scene" at the time. We called it "Black Noise" back then because of Gonkulator, originators of THE BLACK NOISE! Sadly, Nebiru passed away on December 12th, 2015. The cause is officially unknown.
In the beginning did you think the other bands wasn’t extreme enough ?
No this was never the case. We just did what we came naturally, it progressed from there.
I think your albums are really good, and unique, but some people think your project is not serious, what do you answer them ?
We have been accused of being a "parody" band since the beginning. Mocking Black Metal. This is not the case. It's true we use what we consider Humor. We don't take ourselves or our fukknoize too seriously. Enbilulugugal is a real band. A serious band with what we consider to be a sense of humor. Some might not find it funny or take it the wrong way. We're not posing to be anything we're not. This is a genuine band with a lot of time and attention put into it the past 19 years.
I recently wrote a book about GG Allin, and you remind me of him with some “harsh noise” releases he made (suicide sessions and such). What do you think of him ? And Anal Cunt, that I called their “spiritual sons” ?
I've always been a huge fan of Anal Cunt and 80s/90s noisecore, ever since I first got into underground music. Anal Cunt was the first Noisecore band I heard along with Sore Throat. I got into GG Allin later in my musical journey but he is still a favorite when it comes to scummy music. We actually did an Anal Cunt cover back in 2002. Joel Grind from Toxic Holocaust lent his drum skills to it which really made the whole thing come together.
Your album “The Day After” is the soundtrack of a nuclear apocalypse. Can you tell us a little more about it ? Are you really scared about the Apocalypse ?
I welcome the Apocalypse and I hope I live to see it happen. "The Day After" was inspired by the movie of the same name. As well as the movie "Threads". At the time, KumSlinger and I were really into Threads and the bleak atmosphere of the whole thing. We decided to record an album based on the aftermath of a full blown nuclear war. Antihuman from Misanthropy (US) had recorded drum tracks that needed to be used, so we went and got a half gallon of Canadian Whiskey, got plastered and recorded it. I spent a couple years "perfecting" this album before releasing it. I think it came out great, even though it's long and probably boring to most who try to listen. Maybe you had to be there! Another great thing about this album is Christian Dubé's artwork. It really combines the dark humor of the band and bleak atmosphere of the album well. 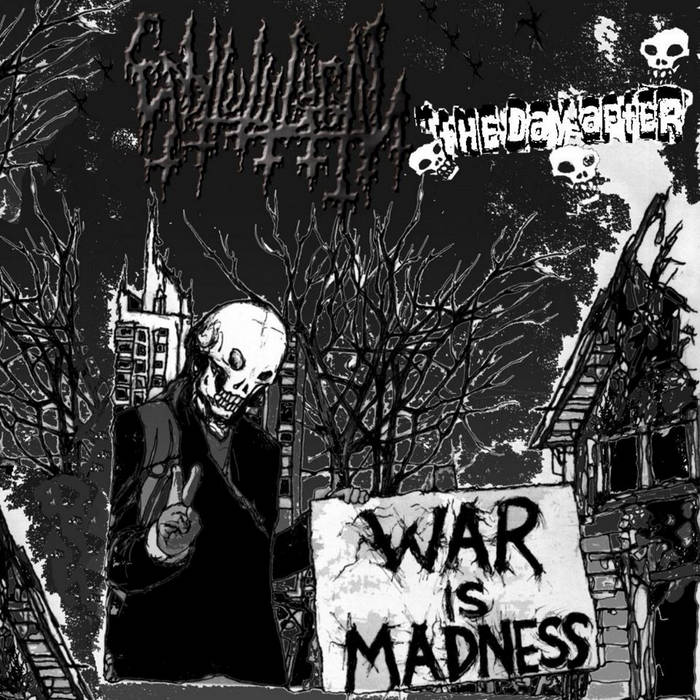 I really appreciate “Praise the Fukken Lard” because it’s more musical in a way, but it’s still crazy…Can you tell some words about this album ?
The music for this album was recorded several years before the actual release. This was the last album to feature our brother Alcoholonomicon (aka Revered J.R. Preston from Tjolgtjar, Blood Cult, Xexyz, etc). A couple months after I had a heart attack, I was living in a shitty motel and finally decided to record the vocals for it. I consider this to be some of my worst vocal work recorded over some of the best music Enbilulugugal ever released. This album also has my favorite Artwork. Once again drawn by the mighty Christian Dubé.
You called one of your Eps “Not A Black Metal Band”.  What is the music you play ? If I tell you there’s something “punk” about what you do , do you agree ?
Enbilulugugal plays TRUE SAMOAN BLACK NOISE exclusively. We also play BLACK NOISE ARMAGEDDON and experiMENTALblackNOISEpollution. Take your pick because I don't know what the real genre would be. All I know is, we are not a Black Metal band. The music has many genres melted together. And yep, punk is in there a lot of the time. 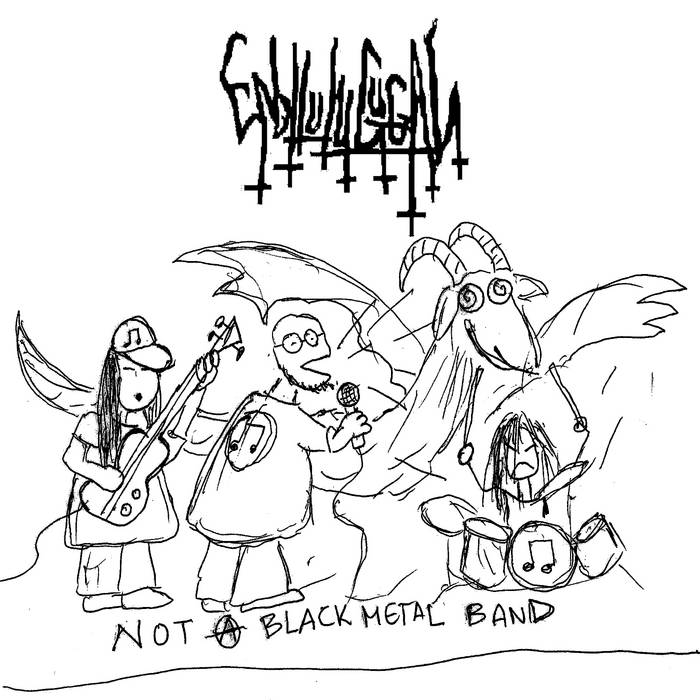 I’m going to talk about your band into two books I’m working on, one about grindcore and the other one about Black Metal. Are you surprised?
That's fucking crazy man, and yeah I'm surprised. All I can say to that is thank you for your support! After being largly ignored, scammed by labels, and badly criticised for so long, it's kind of nice to know somebody gives a shit enough to write about it. I hope this interview helps with your writing.
Can you tell us who you are, as a person ?
I'm a 38 year old person that doesn't like conversation much. Which is why this interview took me so long to complete. Not much to else to say.
Why did you chose to name your band Enbilulugugal, what does it mean ? And  why did you changed it for a little time to Chernobog ?
Nebiru picked the name. He was really interested in the 50 names of Marduk from the Necronomicon. It means:
"The Twenty-Sixth Name is ENBILULUGUGAL. The Power that presides over all growth, and all that grows. Gives knowledge of cultivation, and can supply a starving city with food for thirteen moons in one moon. A most noble Power. His Word is AGGHA."
We thought the name fit perfect because we wanted one that was hard to say and spell. We didn't really care about the definition, but it was later worked into the theme of some albums/songs.
As for the name change to Chernobog and back. If I remember correctly, Nebiru and I just felt like changing the name for some reason, recorded an EP that was released on Unsung Heroes Records, then changed it back. Stupid things that people with OCD do to confuse everyone, I guess. I had changed the name to Nariluggaldimmerankialugalabdubur for about a day at some point as well. But I never really told anyone about that until now.
Your discography is quite plethoric, aren’t you afraid to scare listeners with all that records ?
Fukk No! We live to scare and confuse anyone who happens to stumble on our music.
Can you tell me what are your fifteen favorite records of all time ?
In No Order and only off the top of my head:
01. Godkiller "The End of the World"
02. Barathrum "Hailstorm"
03. Various Artists "Grind Crusher"
04. NME "Unholy Death"
05. Those Poor Bastards "Hellfire Hymns"
06. King Diamond "The Spiders Lullabye"
07. Mercyful Fate "Melissa"
08. Exorcist "Nightmare Theatre"
09. Gonkulator "Satan's Burial Ground"
10. Piledriver "Metal Inquisition"
11. Sigh "Hail Horror Hail"
12. Darkthrone "Panzerfaust"
13. Waylon Jennings "Lonesome, Onry and Mean"
14. Napalm Death "Death By Manipulation"
15. Hank Williams III "Straight to Hell"
One of your most recent lp is called “Los Black Noise Mariachis” and it looks very funny (the cover). Can you describe us the process of this album ?
This album was put together pretty much the same way we usually do it. Most of the time the music is recorded over the internet. Files are traded back and forth until there's a final album. This one was recorded with TheBoogeyman (aka Falko Bolte from Femur, ex--Insanity, ex-ill Content, etc) on Drums (which he recorded onto a cassette tape which I digitized). The GoatRapist also of Clotted Memories on Guitar. LARDMONGER (Stilnox) on Bass and myself on vocals. I mixed and "mastered" the fuckin thing too. Although we have played live as a band once or twice, Enbilulugugal has always been more of an internet band featuring anyone that wants to work with me. As for the cover art, once again the master Christian Dubé. 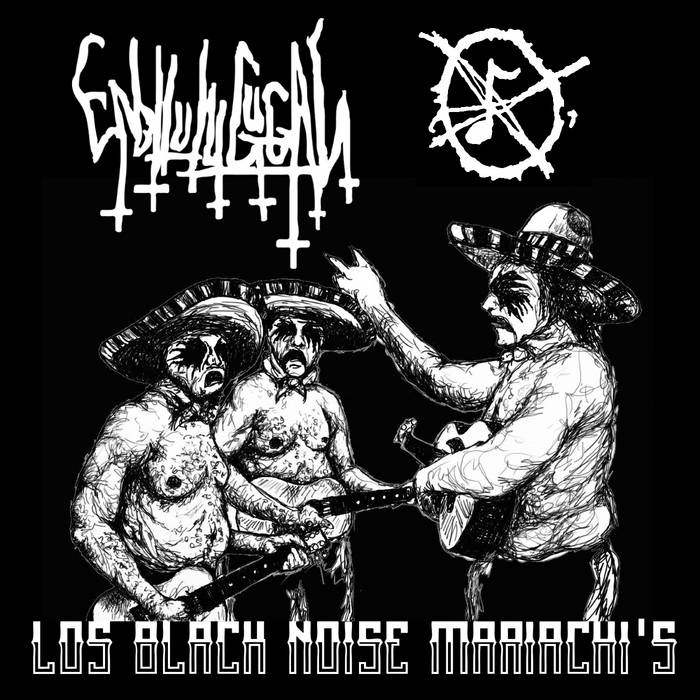 If you were a colour, what would it be ?
I only see in Monochrome.
What are your further projects with the band ?
Right now we are in the process of creating a new Full-length album entitled "WE HOPE YOU FVKKEN HATE IT". It's being recorded with Vis Ortis (Mekigah, Omajinaakoos, DJ Urinal Cake) on the drum sounds and mixing/mastering. P.C. Odio on Guitar, myself on vocals. Murky Dismal does some lead guitar work. It should be out within a couple months and will most likely be Self released on Enbilulugugal KreationsZ as always. The cover art is by Wrest (Leviathan) and is his vision of the GoatSerpent. We are also working on a split with the russian noisecore band, Трупнокалиберный Гноемёт and an all acoustic EP. The projects are never ending and new ideas are being thought up all the time.
You can add anything you want for the readers :
Thanks a fucking million for the interview! And thanks to everyone that read it!

You can get more information and various other shit from the NekroBlog: https://enbilvlvgvgal.blogspot.com