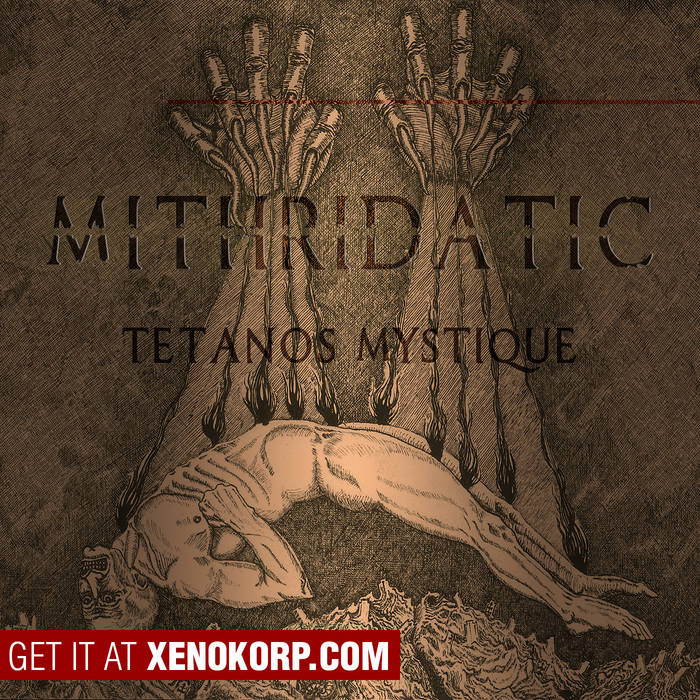 What a slap in the face that this new album by the Mithridatic combo, Tetanos Mystique (what a title!). A mystical and brutal Black/Death Metal explosion bottle-fed with Morbid Angel, Malevolent Creation and Mayhem. A real slaughter that can be compared to international productions like Behemoth or Ultimas. They were kind enough to answer the Scribe....

Hello gentlemen, thank you for answering my questions! Could you tell us about the genesis of Mithridatic?

Mithridatic was created in 2007 in the beautiful city of Saint-Étienne with the desire to make the darkest and most extreme music possible. We are all fans of Dissection, Mayhem, Morbid angel, so we have clearly taken a fast death-black and oldschool direction, without compromise, nor any form of sweetening.

A raw and unadorned music, in our image and that of our city...

You skillfully mix Black and Death Metal, how do you compose? Which groups influence you the most?

Rom :
Thank you! Thank you! Yes then the process is done in several steps, Alone at home, I start by composing guitar riffs and structures roughly.

Then I send all this to Kevin who will compose his drum parts and make me the first feedback of modifications if necessary.

Then the others come to compose their parts at their own pace until everyone is satisfied with the piece.

It often happens that great ideas are born by chance in rehearsal. Especially the end of "The dead mountain of life" when the last riff comes back after the silence! It wasn't planned but it's one of my favorite parts of the album!


Your drummer, Kevin, is known as a gifted drummer and probably the fastest drummer there is. How does it feel to work with such a trigger?

Rom: So working with Kevin is very challenging in many ways. First of all we are in unlimited credits in terms of speed and technique (laughs)! Which is good since I'm a big fan of ultra speed.


On stage he is impeccable, we have total confidence in his playing, he never plants a piece! It's a huge security.

Finally, he is clearly a leader, someone who will take his projects as far as possible. We can only rejoice to have him with us and he also cooks very good burgers (laughs)

Guitou, you are a book lover, can you tell us about the authors who matter to you?

Guitou : So maybe that's the image that a lot of people have of me, but I'm not a regular reader, I have a few favorite authors and I often simmer in the same books, Antonin Artaud, Louis-Ferdinand Céline, Charles Bukowski it's the kind of authors you can think about a sentence for a lifetime, that's why they often come back in MITHRIDATIC ; I discovered Roger Gilbert-Lecomte, I looked at his biography, his correspondence (as I often do when I am interested in a writer), I was struck by his poetry and by the person's fate.


As for Michel Bernanos and "the dead mountain of life", I was very impressed by this book, they were very useful to me to describe places, strange worlds, hostile cosmos...


Can you tell us about this "mystical tetanus" that gives its title to the new album?

Guitou: I would like to talk to you about the content of this book but it is very difficult to access and therefore I only used the title... I must admit that I was very impressed by the fact that Roger-Gilbert Lecomte wrote "Le Tétanos Mystique" at 16 years old and that he died of a crisis of this same disease 20 years later... a kind of prophet who plays with rusty needles... ahahah...

The French Black and Death scene is doing very well, don't you think ?

Rom :
Yes, it is certain that the French black-death scene has many nuggets. We always enjoy discovering bands during concerts. In particular: Ad-Patres, Iron flesh, Hysteria ,Burn your Karma, warfuck, Maieutiste ,Sublime Cadaveric decomposition, Benighted ..... And so the list is long!  And then the return of Arkhon's unfaithful bosses!

If I tell you that your new album reminds me of a mix of the best of Morbid Angel and Mayhem, is that okay with you?


Yes in the absolute it suits me because they are two great influences for us.
I hope you could also see in us a more personal music, we tried to record a varied album with a maximum of atmospheres!


Your 20 favorite albums of all time?

Eyehategod: take as needed for pain.

Dissection: The somberlain, Storm of the Light's bane

Dead congregation: Graves of the archangels, Promulgation of the fall


Deicide: Serpent of the light

Only new what... (laughs) No seriously I think that the bands and albums you discover as a kid make a lasting impression on you... Nothing can dethrone them.

What if Mithridatic was a citation?

Guitou: "Give us that again! "it even works for our epitaph...

By the way, what does Mithridatic mean?

Guitou: Mithridate the Great was a king who immunized his body against poisonings (frequent at the time), by taking several poisons daily and gradually... We use MITHRIDATIC as a tool, intoxication and a perpetual struggle to face and finish this poisoned world; a tool to accomplish itself, and this until the end.


Free space: add what you want!

Thank you for your interest in our music, we will be in concert at the beginning of November at the Hell'oween fest in Saintes, then on tour from 17 to 21 December. We will pass through Paris, Lille, Lyon, Fontaine-l'évêque in Belgium and Geleen in the Netherlands.