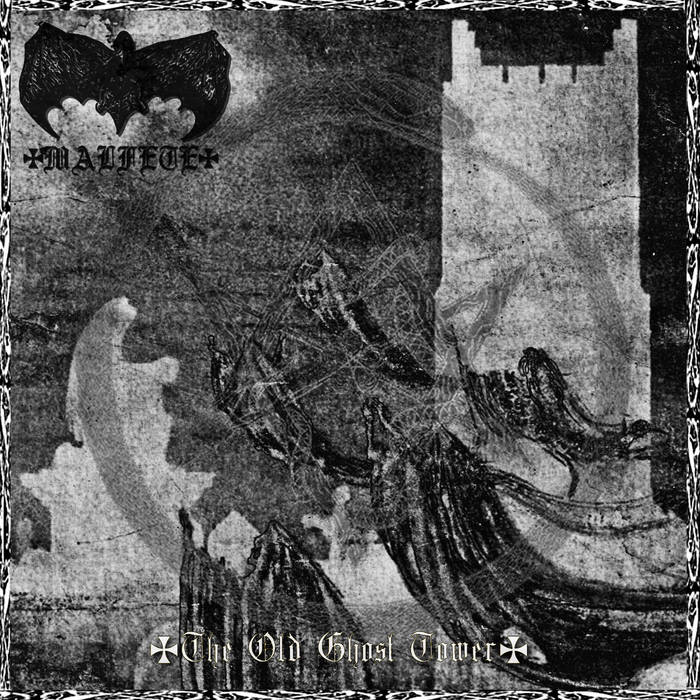 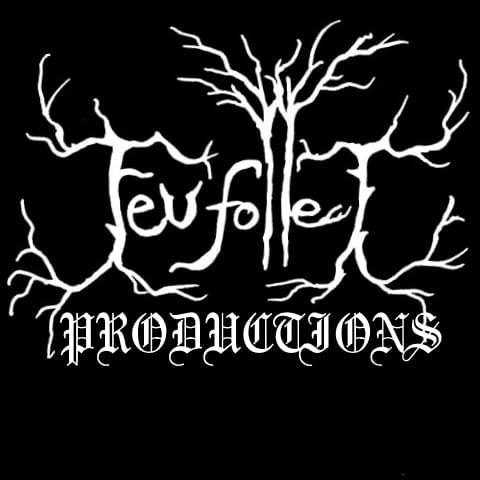 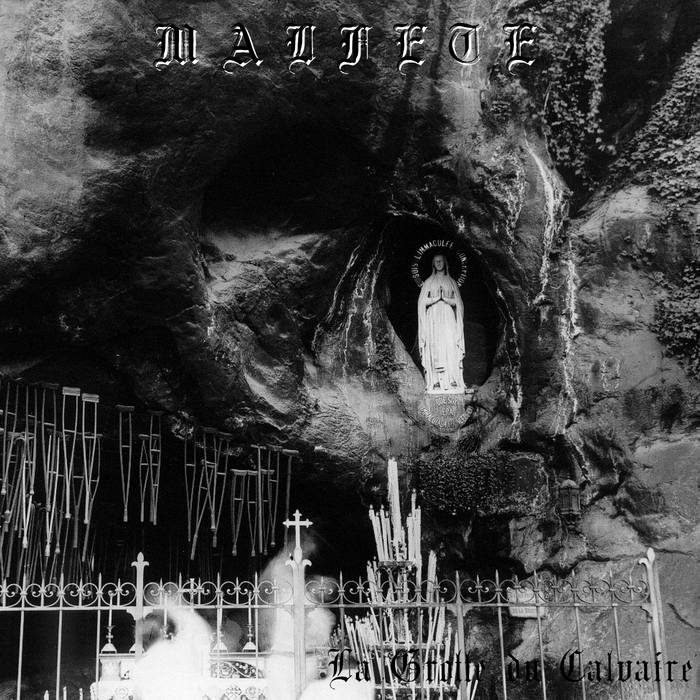 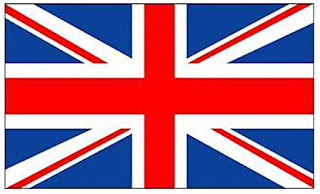 Malfete is one of those very black Dark Ambient/Dungeon Synth entities that are immediately linked to Black Metal. And for good reason, Attila, who governs the project, is an unconditional fan of Black Metal, Old School in priority. Interview with him where we talk about Malfete, Black Metal, the origins of Dungeon Synth and many other things! Thanks to Feu Follet Productions for this great discovery! Le Scribe

Hello Attila, can you introduce us to Malfete?

Hello to you Pierre, and thank you again for your interest in my project ! So let me introduce myself, Attila, I am the only member of the Malfete project. A dark ambient and dungeon synth project that I plan to turn towards black metal very soon. Malfete himself is a character that I invented, a kind of vampiric alter ego, a vampire who thinks back with melancholy to another time, to his more glorious past and who wanders so much in the Père-Lachaise, sometimes in the streets of Paris in the 21st century where he doesn't feel at his place anymore.

"The Old Ghost Tower" is your first album. And it's a success! Your Dark Ambient/Dungeon Synth is very dark. Can you tell us about your inspirations, influences, and the making of this first album ?

My inspirations for this EP are quite multiple, there is a bit of Isengard, a bit of Wongraven and a lot of Burzum and Bathory. The first track, the intro by the way, was composed while I was listening to Bathory's first album and its intro "Storm of Damnation" but instead of using bells in a storm I "respected" my cover and modified ghost screams and other ghosts to make a very sinister and oppressive intro to set the scene for the album.

How did you get in touch with Feu Follet Productions who released your album ?

So I'm not really sure anymore, because my memory can easily fail these days. But it seems to me that it was my friend, my brother in arms from La Horde Noire, SHELOB, who told me about him, so I sent him a message to discuss with him about a secret split we were preparing and in the end I told him about Malfete and I played him a track. He liked it and he was very excited to produce the EP for me. Since then I'm proud to have released my very first CD at his place and I can't wait to have more creations to offer him.

I know you're a fan of Black Metal, especially Bathory (my idols too!) How do you situate Malfete and the DS in general in relation to the BM?

For me the DS (but I prefer to talk about dark ambient) has always been linked to the BM. One of the pioneers of the genre, of the second wave, Burzum and the list goes on Fenriz, Mortiis, Satyr de Wongraven and I'm sure that if Quorthon hadn't left this world, Bathory would have gone the same way, according to the many synth parts in Nordland I & II. So I situate the DS as a direct sub-genre to black metal, I like to call it in fact "Black Metal in Synthesis".

How do you see the current French scene (in DS and BM) ?

I don't know if you've read my Arsule itw recently but I really appreciate what it does, as does Hermith! What do you think about it ?

I really liked what Arsule does but I don't have time to listen to what she released recently, I often listen to "Fumeterre" several times, while in Hermith I haven't listened to it yet but I intend to start listening to it. As far as the French scene is concerned, I admit I don't follow it too much except for black metal, but in DS, apart from La Dame de Mordomoire and my friends ElixiR and Shelob, I'm not very aware of the latest French DS releases and I think it's a shame, there should be a huge "French Wave" in this genre... I hope it will happen in 2020... In Dungeon Synth I listen a lot to Fief, Mirkwood, Mortiss and Burzum's albums axer dark ambient. I also listen to Windtower, Old Tower, Old Sorcery and Vindkaldr as well as my last favourite from 2019, Utred.


In which musical genres have you trained your ear?

This is a vast subject, I trained myself in composition and production on FL Studio during an electro period, via house music, hardcore techno, psytrance etc before coming back to a much darker universe. As for the rest, Malfete's influences are mainly Norwegian black metal and the first wave.

Well I would be modest I would say, I wish to broaden my contacts in the movement whether it's French Black metal or dark ambient, to release a quality demo before looking at my first big album... We'll see what happens next.

Do you think that the medieval aspect in the Dungeon Synth comes from a "de-love" of our contemporary times?

Completely, I'm the first one by the way! I was born and grew up in a housing estate in the Parisian suburbs and I'm still there, I've always felt much closer and more "at peace" in the countryside or in the nooks and crannies lined with landscapes and ruins and towns with still traces of their medieval periods, like the Dordogne, Alsace, Lorraine or even in the nooks and crannies of Ile-de-France, Pierrefonds or Provins. Moreover during the last 10 years the only moments of peace I have known is when I was in those corners, an isolated house at the bottom of the Dordogne, the great forest of Fontainebleau where the ruins of Provins and others and visited the churches of Aquitaine. It's not hard to feel a disenchantment or even a deep disgust with our times in view of what we are doing to our planet, the news and everything else. And I'm the first to say so. And like a certain field rat, I too am thinking of going into exile one day in deepest France and never coming out of it. And I've already chosen my land of exile, by the way.

Do you already have new projects (or maybe it's a bit early?).

No, apart from what I've already announced on my facebook page, the demo for Malfete that I'm preparing and then the work on my first album (Full Lengh) but I'd rather not say too much about it for the moment.

In Dungeon Synth I listen a lot to Fief, Mirkwood, Mortiss and Burzum axer dark ambient albums. I also listen to Windtower, Old Tower, Old Sorcery and Vindkaldr as well as my latest favourite from 2019, Utred.

And as for black metal, apart from my classics that I listen to every day (Bathory, Burzum, Darkthrone and Mayhem among others) I enjoy discovering the very efficient Quebec Black Metal scene including of course Forteresse, Monarque, Chasse-Galerie, Csejthe, Brume d'Automne etc..

Add what you want :

To finish, I will add that this year 2019 was very difficult for me at the beginning, on a personal level. But it was also a year full of encounters and travels where I discovered a lot of beautiful places throughout our kingdom of France as I like to say and it allowed me to keep my head above water. I had the pleasant meeting of Lunebarde de ElixiR and Nazgul Gorrduk aka Shelob with whom I represent La Horde Noire, I discovered more than collaborators musicians, friends, comrades, I would even say brothers in arms! And we hope to surprise you with our future creations. Also it was a year of achievement, I had founded Malfete in 2016 and I had never managed to create anything before 2018 and 2019 I released my first CD thanks to Feu Follet who did not hesitate one second to give me his support and confidence and to perform! And finally I also wanted to thank you Pierre for having offered me a great visibility thanks to your webzine "Le Scribe du Rock" whose article you had done on my EP "The Old Ghost Tower" and the fact that it was ranked 35th in your TOP 50 2019 was for me an honor and a pride!

And of course I thank once again Quorthon de Bathory to whom I had dedicated the EP without whom, I simply wouldn't be here today!

Thanks again to you The Scribe!