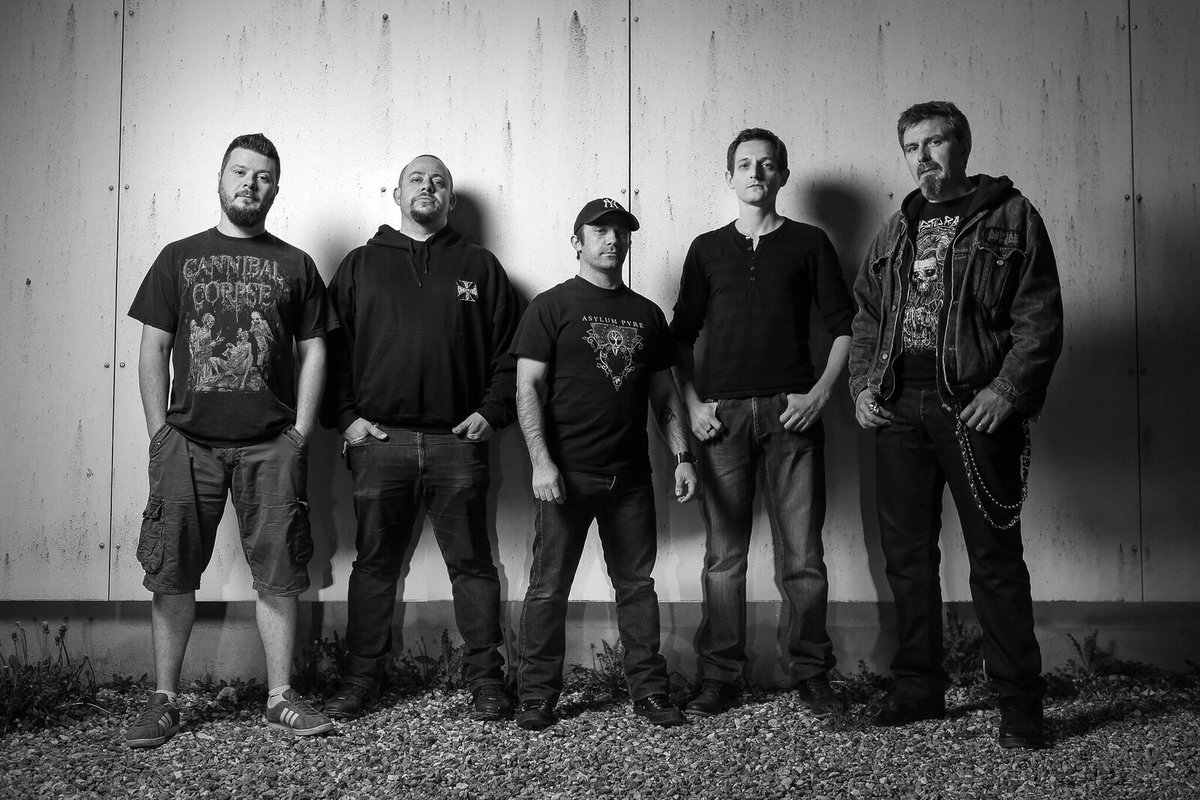 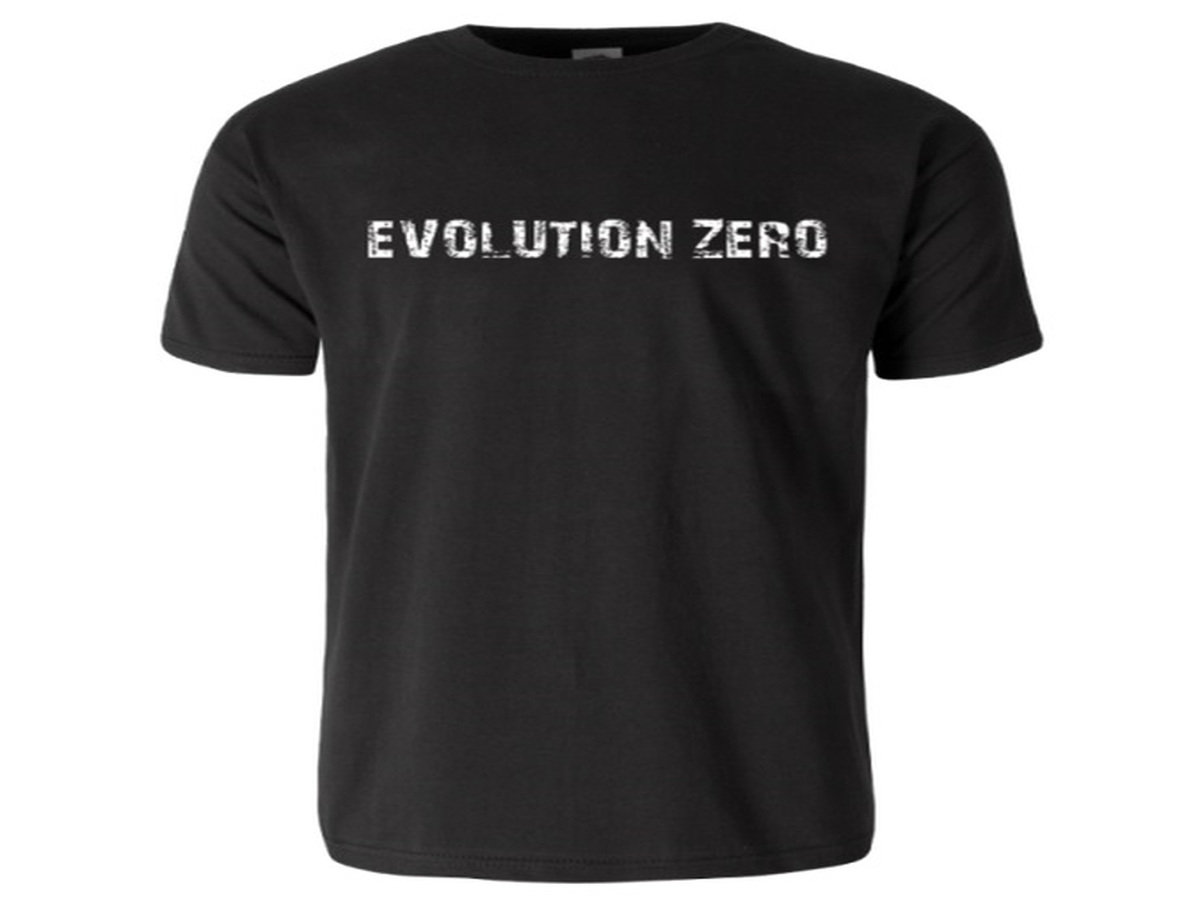 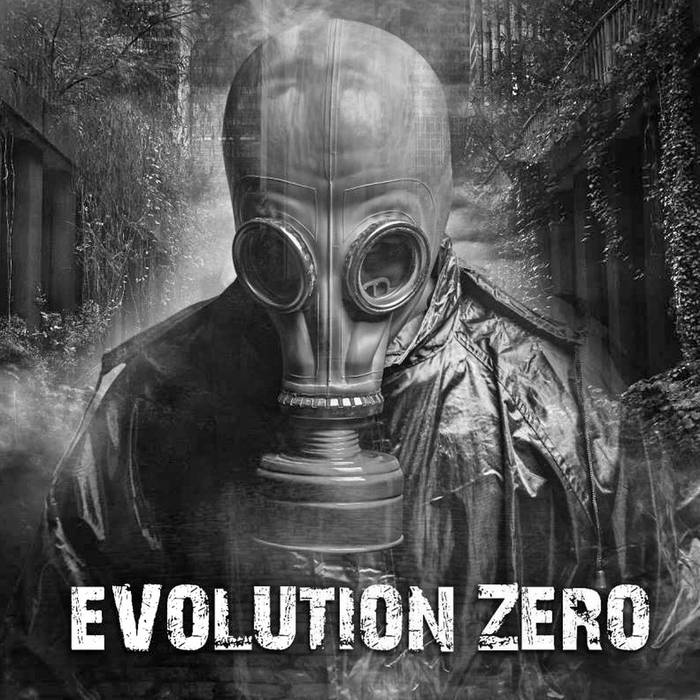 
-Evolution 0 was born in 2011, following the desire to make a project influenced by Death Metal and Thrash Metal bands of the 90's.
-Band basis for his writings on social realities, the eternal, the themes in connection with progress and a permanent return to the primitiveness.

(Presentation of the band on Bandcamp)

Hi Evolution Zero! Can you introduce yourself? Where are you from? How did you create the group?

JP: Hello Scribe! We are EVOLUTION ZERO, Ev-0 for close friends and we come from the corner of Yvetot, in Normandy. The group was formed with Dav' between the end of 2010 and the beginning of 2011.

We've known each other for more than 20 years, we had the common desire to form a band to play a genre we liked, a project that was to be called THE P. PROJECT and be a cover band in tribute to PanterA just for the two of us, in guilty pleasure. Add to that the ease that Dav' has in composing almost non-stop and the desire to do something more personal, we have made it evolve (hu hu hu ^^) that in a group with the arrival of Tatav in 2011. The Line up was finalized around 2015 and the 1st album was released at the end of 2016.

DAV: Hello Scribe, everything is said ;-)

You play Thrash/Death Old School in the good taste of the great era. Which groups have made their mark and pushed in this direction?

JP: At the base group level, we agreed on the classics such as Death, Suffocation, Machine Head, Sepultura, Biohazard and all that 90's clique. We wanted to play something effective, direct, technical when it was necessary and especially without taking the trouble to have to respect the codes of such or such styles.

DAV: I don't really have a direction when I compose but I think that unconsciously my influences stand out, you can clearly find Slayer, Death, Morbid Angel and all the big names of the 90's

Your eponymous album was released in 2016. How do you look back and what feedback have you had?

JP: For returns, in 99% of cases, they are quite good! So yes, when it comes from friends, you can sometimes say to yourself, "Yeah, but are they objective? "and then worse, you come across a column from a guy you don't know who puts a 9/10 on you and clearly says all the good things he thinks about the album, and then you say to yourself, "Fuck, YES! We did it! We did it! ».

DAV: Clearly, I would be more critical, the black spot is clearly the voice that seems too outside the mix to me, but musically it sounds like I wanted it to and the feedback is in line with what I was trying to get.

JP: For me, it's the first album, the one where it all starts. There are some details I will come back to, but at the same time, it is its so "natural" side and which corresponds to us totally that I like.

And then to think that we were able to share the boards with bands like Misanthrope or Benighted, it goes beyond anything I actually play for. We work for that, we don't steal anything from anyone, but when these kinds of plans fall apart, we can only feel pride.

When we listen to you, we quickly think that we are dealing with a stage group. Is that how you see yourself?

JP: I only play in a group to do the hahahaha scene! I love these moments. So I always make sure I give 15000% of myself so that the people in front of us say "Well, guys, they get complained about on the boards and you can feel it! » !

DAV: It's funny that you say that because I personally hate the scene, I don't have fun, I'm happy that I'm locked in the studio. However, when I compose I always think about how the song will sound live.

JP: Yes, we always want to do parts that we will be able to do live again... Which means that what you hear on the album, we also know that you will hear it live. This is a point to which we attach great importance. We are voluntarily Old School in our approach and there is nothing worse than to offer a product that you will not be able to make again for real. It's not always easy, but it forces you to keep up and work.

Your music makes no pretensions other than to perpetuate a genre, or rather the genres you enjoy, is that it?

DAV: There is no pretension because we only play for the pleasure of playing what we love, we have no dreams of glory.

JP: We were built in the 90's and the values of that time... Mutual aid, sharing, passion etc.. Nothing worse than looking in the neighbour's bowl to see if he has more than the other. It pulls our scene down and leads nowhere!

How do you see Metal today? Which groups find favor in your eyes?

JP: Metal today... What can I say? For me, a band is not measured by the number of likes on its page but by its ability to slap asses on stage and behave well with others, that's all!

I like bands like INFURIATE, THE BLACK DAHLIA MURDER, HATESPHERE etc. My favourites of the moment are LEPROUS and if not, at a national level, bands like ATLANTIS CHRONICLES (well I admit, I'm ultra fan of their albums ahah !), SMASH HIT COMBO, especially with his albums "No life" and "Reset" or my friends from the south AKIAVEL. Watch their page, they're coming with an album soon and really, it's going to take out the snags! Beyond being creams in real life and doing it with passion, they are hard workers... and they are afraid not to behave like Divas!

DAV: Personally, today's "scene" really pisses me off, too many people who do metal because it's "hype", they don't know any old bands, no culture, they think they're the best and they do riffs on Guitar pro that they can't play live. Fashion is at the party by mixing dance or other shit, parties typical of 80/90s nightclubs and we find ourselves with DJ's dressed in black metal, it becomes anything.

Fortunately some bands are starting to work a little harder and release excellent albums like BAEST, SKELETHAL or SKELETHAL REMAINS

JP: There are groups that play music, and others that make music. That's the difference! Playing must bring a notion of pleasure, Doing brings a notion of constraints. We come across bands that have lived longer than their grandfathers, that swear by the debauchery of technique, notes and Likes... but Hey! Guys! Where's the music in all this?

Can we expect a new album?

DAV: The second album is coming, it will come out in pain because there were several unforeseen events that pissed us off.

JP: It is taking shape little by little and all we can say is that we have let go of the horses in terms of violence and technique;). But we prefer to take our time too and release a product that we will like... No need to want to go fast.

Your 20 favorite albums of all time?

JP: Pffff... not easy... Already, people who know me know that I idolize Death and his album "Symbolic" and that I will also place "Individual through Patterns". Then... There are so many...

IRON MAIDEN "7th sons of the 7th sons", although "Powerslave" and "Somewhere in time" are not far behind....

METALLICA, my heart swings between "Master...", "And Justice..." and the Black album that I will not be able to decide between at the moment T.

SLIPKNOT, the same... hard to choose between the 1st and the 3rd Vol...

Raaaaah... I can't stop on specific albums because it changes with my mood at the moment ^^'... Sorry! But I would say that these are part of the albums that built me as a drummer.

DAV: Ooh, we're not going to talk about albums but about the bands that marked me, Death, Carcass, Metallica, Slayer, Morbid Angel, Orphaned Land, Atheist, Vader, Sepultura, Megadeth, Testament and many others

What can we wish you?

DAV: The release of the 2nd album

JP: And keep it that way, hahahaha!

Free space: add what you want:

JP: Thank you to you for the work you do through your pages, interviews, columns etc. and to all the actors of our beautiful scene for their devotions and their work. Thank you to all the people of our tribe: the In Hell, Corrosive Elements, Explicit Silence, Akiavel, G Nomes, Dead-Back and sorry for all those I forget ahahaha! But know that I love you, even if you make fun of my size, you Sapajoux bastards! And above all, thank you to all those people who support us like nothing!

DAV: Thanks to you, Don't forget to support the French scene and the little concerts and the people who are fighting to bring this style of music to life, see you soon on the road.